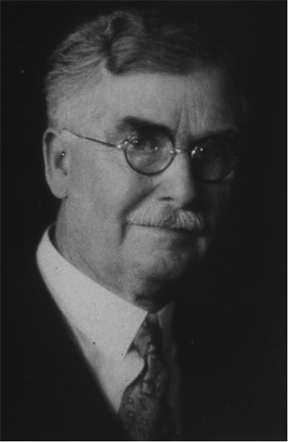 1856-1954 Herbert Osborn was born at Lafayette, Wisconsin, March 19, 1856. He showed great interest in plants and animals at an early age, and grew up in Fairfax, Iowa, where he acquired a lasting interest in agriculture. He attended Iowa College, Grinnell, Iowa, for a few months but in 1876 entered Iowa State College. He graduated in 1879 with the B.S. degree, being the first student majoring in Zoology. He received the first M.S. degree given at Iowa State College in 1880 and the first honorary degree of Sc.D. in 1916. The L.L.D. was conferred upon Professor Osborn by the University of Pittsburgh in 1930, also the same degree from Ohio State University in 1936.

He conducted two years of graduate study 1881-1882 at the Museum of Comparative Zoology at Harvard, and at the Zoological Station ni Naples, Italy, 1884-1885. Osborn left Iowa in 1898 to become chairman of the Department of Zoology and Entomology at The Ohio State University (1898-1916).

His reputation as an economic entomologist continued to grow and he attracted many graduate students from various parts of the world. Professor Osborn was appointed subsequently (1916-33) to a research professorship that provided more time for his own research and for advising and directing research of an ever increasing number of students. He was named emeritus professor in 1933 at Ohio State. He died September 20, 1954, at Columbus, Ohio at the ripe age of 98 years. Professor Osborn's research interests were largely concerned with the taxonomy and biology of the Hemiptera, Anoplura, and Thysanoptera. He revised numerous genera and described many new species of Cecadellidae. Many insect species bear his name. He was author or coauthor of more than 500 publications.

Osborn was the recipient of a variety of honors and awards. A charter member and one of the organizers of the American Association of Economic Entomologists, he was its tenth president (1898). He served also as President of the Iowa Academy of Sciences (1887), the Ohio Academy of Science (1904), the American Microscopical Society (1907-09), the former Entomological Society of America (1911), and the Society for the Promotion of Agricultural Science (1917-19). He was editor of the Proceedings of the Iowa Academy of Sciences (1889-98), a vice-president of the American Association for the Advancement of Science (1917), managing editor of the Annals of the Entomological Society of America (1908-29), and director of the Ohio Biological Survey (1912-54).